A gentle walk around Ardersier village 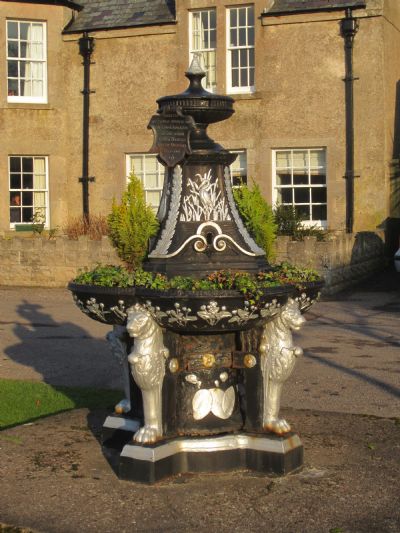 Ardersier is documented from 1227.  It was once part of the diocese of Ross to the North of the firth.  There was a ferry used for travel and trade to the Black Isle and was the busiest crossing of the inner Moray Firth as main travel routes historically were by sea until the military roads were built in the 18th century.

Leave the cottage and turn right towards the village, cross the road where the pavement starts on the shore side of the road.  When the tide is low you can see the old jetty supports. The jetty was built in 1865 to support the fishing trade but the fishermen were charged to use it so they continued to pull up their boats along the shore.

Continue along the shore path past the public toilets and the two dolphins ‘Moray’ and ‘Cawdor’ on the grassy green that previously was used for drying nets and pulling up the fishing boats.  The 20th century saw the demise of the fishing from Ardersier, and the last of the fishing boats were used to fuel bonfires celebrating the end of World War II in 1945.  During the wars, Ardersier was busy with servicemen and trainees at Fort George.

Passing the slipway continue along the path then turn right away from the coastal path which continues for one mile along the well surfaced path towards Fort George, (built by the British Government following the 1745-1746 Jacobite uprisings, although it is still an active army base it is owned by Historic Scotland and open for visitors, the Regimental Museum is well worth a visit and the fort is very impressive as are the views across towards the Black Isle and the Moray Firth.  The walls are an excellent place to spot dolphins between Forth George and Chanonry Point).  This grassy path is beside “Cromal Terrace” a row of cottages built in 1903, the field was formerly the village bowling green and tennis courts.

At the end of the path turn right towards the village.  The hill above the village is Cromal mount, a hill top fort and possibly medieval motte have been excavated, Ardersier was inhabited as far back as Mesolithic times.  (there is a grassy/sandy track you can go up to get an excellent viewpoint over the inner Moray Firth and Forth George).  Continuing along the road you will soon pass four Edwardian houses built in 1910 overlooking the Ardersier Football pitch.  At the end of these houses turn right towards the sea, signposted Community Garden, The village has several groups of hard working volunteers that are enhancing the area for the benefit of the many. Our environmental group, JAPES (Junior Ardersier and Petty Environmental Society) got together with the BBC’s Beechgrove Garden in 2004 to produce the community or pocket garden.

Between the car park and the old sheds is an old boundary stone, previously a part of a line of stones marking the military boundary for Fort George.  During the two world wars the military line was positioned in front of the fort and locals needed a pass to travel across it.

From the boundary stone, turn left towards the High Street, this lane was Black Vennel a network of lanes running between the cottages, the High Street and the shore.

Cross the road towards the hayloft and stable of the Gun Lodge Hotel.  The hotel was a private house, ‘Cromal Lodge’ built by an Army officer in 1769, the hotel is said to be haunted by Georgina a girl jilted in love.

The water fountain near the hotel was built in 1901 to commemorate the death of Queen Victoria in 1901.  As you walk along the High Street, you will see a mixture of 18th century cottages that were built by Cawdor estate to house working families when they were relocated from Fort George land, also larger houses that were built for officers at Fort George.  The notice board in the village square has more historical notes.

At the Y junction is the old Alma Hotel, it has an unusual three sided north end as it was reputedly built as a lookout for the roads leading to Fort George. It became an inn in 1812 and continued as such for 160 years. It was also a shop and you can just see the old painted signs above the windows: Chandler, Tobacco and Grocer.  In the 1840’s there were 10 public houses in Campbeltown – part of the now Ardersier, the house ‘Eskadale’ was one of these hotels and was a Temperance Hotel – The Temperance movements was very strong amongst fishing communities and alcohol was forbidden.  100 years ago Ardersier also had over 50 businesses, you can still see shop fronts in some of the properties.

Across the High Street is the Star Hotel, this hotel was part of a coaching inns network, where stagecoach travellers could eat, rest and change horses.  Behind the inn is the ‘Posty Well’ one of several Ardersier wells – the well on the shore was believed to cure whooping cough.

Continue along the High Street going past the Old Free Church to the junction at the bottom of School Brae, if you look up the hill you can see the gable end of the old village school of 1981.  The cenotaph is also at the top of the hill.  Just beyond was Fort George Railway Station – the terminus of the railway branch line which operated from 1899 to 1958.

Cross the road to the small lane and follow it along past some small cottages to the right, soon you will come to ‘Windyhill’ now the last thatched cottage in Ardersier, the village used to have 365 thatched cottages. Turn right down to Stuart Street and then left back to the cottage.

For more information on historical Ardersier, The Pace café near the library and Spar shop has other interesting photos of old Ardersier on the walls.

Allow about an hour unless you decide to continue on to Fort George.